A Day in the Life of….Trek Atlas 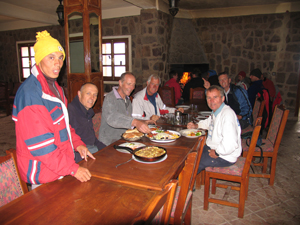 What is it really like trekking in the High Atlas mountains of Morocco? In May 2008 a group of us found out when we did a 6 day trek from Imlil with Ahmed as our guide. It was our first experience of a “guided tour” and we had no regrets at the end.

So what can you expect? First of all mules and muleteers! The mules do the hard work of carrying the camping equipment, most of the food needed for the trek and your heavy luggage, preferably packed in a rucksack or holdall. Believe it or not, they use only female mules as their temperament is better suited to the work. They start working with light loads at about one year and have a working life of 27 – 30 years. Good mules can cost around £900 and can carry up to 120kg.

Accommodation on the trek varied from camping, refuges or staying in a Berber village house (gite). The camp sites were often idyllic, usually by the side of a stream or river – ideal for summer swimming – and included a dining tent which provided protection from the heat of the sun and also in the evening shelter from the cold and even occasional rain. In May, as we learned, it is still very cold at night as we camped above 2,000m.

We stayed a night in the Toubkal refuge which at 3207m is about 1000m below the summit of Toubkal (4167m) It is a large, modern refuge with dormitories of varying sizes, good showers and a large communal area with roaring fire – much needed when we arrived in a snow storm! Our food here was still prepared by our cook, though we could also buy snacks from the refuge shop. There are stunning views from the refuge up towards the Toubkal summit and back down the valley.

One night we stayed in a Berber village house or gite in Amsouzerte. This village, like many on the trek, has no electricity, so lighting and heating (for the showers) was by bottled gas. Again our food was prepared by our own cook – a tasty chicken tajine – the chicken being bought in the village. Incidentally, it is easy to spot the villages with electricity as nearly every house has a large white satellite dish on the flat roof, clearly visible as you approach the village. 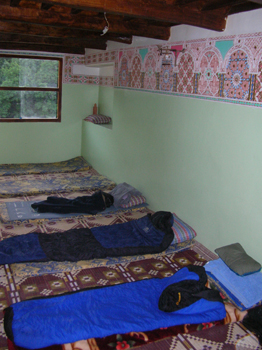 On another occasion, because of bad weather Ahmed arranged for us to sleep in a pilgrims’ hostel at the shrine of Sidi Chamarouch. This was a strange experience as the shrine attracts many pilgrims who arrive on foot or mule and stay the night. The shrine itself is barred to non-Muslims, but fortunately the hostel is not! Here as always we slept on the floor on comfortable sleeping mats which the mules carried. We only needed to provide our own sleeping bags – and we were glad we had brought warm ones. At altitude it is always cold at night. Sidi Chamarouch, because of the pilgrims and trekkers who pass through, is full of small stalls and shops selling snacks, soft drinks and souvenirs. It was almost surreal after the barrenness of most of the trek.

Our three mules carried our food which was supplemented with fresh food, particularly eggs, fresh bread and meat, bought in the villages on the way, though there aren’t shops as we know them in the High Atlas villages. All the food was cooked by Mohammed, our cook. Unlike Ahmed who spoke excellent and colloquial English, the muleteers spoke no English and only Mohammed spoke some French.

Breakfast was an early meal and consisted of a hot drink (tea, coffee with dried milk), bread, jam, chocolate and cheese spreads and honey. This was enough to face at 6.30 in the morning! We then set off for the morning’s trek.

After our departure the muleteers packed everything up, loaded the mules and would overtake us on the trail and be ready to welcome us, around midday, with mint tea followed by a freshly prepared picnic lunch – complete with blankets to sit on! Lunch was a cold buffet, typically pasta, sardines (Morocco is a major world producer), tuna and salad, and also – Mohammed’s speciality – a hot dish of potato, tomato and chick peas or a Moroccan omelette.

When we finished our day’s walk, usually mid afternoon, we were always offered mint tea. By the end of the trek our initial enthusiasm for mint tea had waned! We then had time to relax, explore or talk, often with Ahmed about the Berber way of life. The evening meal was usually soup and a meat or vegetable tajine prepared from the basic ingredients (potatoes and carrots were peeled by the cooks) and cooked very efficiently on a small gas stove. Whenever possible there was fresh fruit (melon, oranges). No alcohol though, unless you sneak some with you.

Most of the walking we did was along narrow stony tracks, sometimes very faint and rarely waymarked. Without a guide it would have been very easy to get lost – yet we would meet young boys herding goats in remote valleys or on high peaks, miles from any village. On one occasion a young boy aged about 14 had seen us from his village in the valley heading for a pass at 3,500m and had climbed up over 1000m to meet us at the top. When we arrived in a biting wind at the summit he had beaten us and set up in a row the six bottles of Coke he had carried up with him which he hoped we would buy. We did but more out of admiration for his toughness and entrepreneurial spirit than desire for a fizzy drink. He packed away the empties and set off again down the valley in his Wellingtons.

As we approached the villages we saw the small cultivated fields, with crops of potatoes, maize, tomatoes and oats and wheat. In the fertile valleys were orchards of cherry, walnut and apple. Young children were herding goats or walking to school, women were carrying heavy bundles of fodder cut from the fields for the cattle, men were tilling the fields. Once we saw a massive tipper lorry carrying about forty workers back to their villages. Bit by bit the traditional Berber way of life is changing as tracks are widened and become passable to trucks, holes are prepared for electricity pylons and more villages are connected to a mains supply. 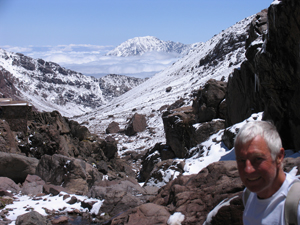 But May is still the time of the transhumance for many in the mountains, the moving up of whole villages from the valleys to the high summer pastures. We saw empty villages being prepared for summer occupation. They were surrounded by mountain pastures and extensive, old networks of irrigation ditches. One shepherd we met was wondering where everyone else was: he had apparently set off a week or so too soon and was now having to return down the valley!

We carried only day packs and as we knew we would catch up with the mules again at lunchtime, we carried only essential items: water (purified stream water), snacks (brought with us from England) and extra clothing as it can be very cold at altitude. Walking poles are very useful and good boots essential for anything but a day trek from Imlil. The walking itself is not difficult and Ahmed made sure that we maintained a leisurely pace, allowing plenty of time for stops, photo opportunities and scenery gazing. He also took pride and pleasure in explaining to us the Berber way of life. We learned a lot about their language, culture, religion, agriculture, family life – and mules! We also learned that the indigenous fauna of the area includes foxes, rabbits, wild goats and squirrel, but were assured that it is too cold for snakes and scorpions – at least when we were there!

Most of us suffered to some degree with altitude sickness during the first few days. We were glad that by the time we reached the Toubkal refuge we had acclimatised, helped by almost daily climbs over passes of more than 3000m and by camping at altitude. In the refuge we met another party of walkers who had walked up from Imlil in one day, a height gain of about 1500m. They were not experienced or very fit and were suffering with sore feet and altitude sickness. They intended to climb Toubkal the following morning, but as we discovered, they were not fit or well enough and had to descend. 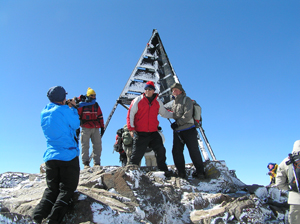 The ascent of Toubkal was undoubtedly the highlight of our trek, particularly as there was some doubt as to whether we could do it because of the unexpected fall of snow as we arrived at the refuge. We got up the next day at 4.30, just before dawn, and by the time we were dressed we could see the sun rising on a truly winter scene. After breakfast we set off at 6 am for the 1000m climb to the summit. We were not alone as other groups were also making their way slowly up to the summit. The nearer we got, the colder it became, because of the wind chill, until eventually we were wearing every item of clothing we had with us. Gloves and hat were essential.

But it was all worth it. We reached the summit with its metal pyramid at 9.20. The views were stunning, but because of the intense cold – even the water in our bottles froze - we stayed less then 10 minutes. We found it difficult to believe that in the summer it is warm enough to bivouac at the summit! We arrived back at the refuge at noon in bright sunshine and had a very welcome lunch on the terrace before setting off back down the valley for the long trek back though Sidi Chamarouch to Imlil. We slept well that night!

Would we recommend trekking in the High Atlas? Definitely. It was a great experience, at times challenging but always enjoyable and good value for money. Definitely a “package holiday” with a difference! What Our Clients Say!

Feedback on tour in Atlas and Toubkal... we had an amazing experience exploring the mountains. All practicalities worked out perfectly from airport-Imlil-Marrakech. Our crew led by Hassan was outstanding. The food was really good and so was the program. Thank you, and hopefully we will be back soon, best regards

Photos from our treks